For me the greatest part of Football Manager is developing the careers of my newgens. Over any other aspect of the game, even winning championships, the most rewarding and exciting aspect of the game is youth development. The game doesn’t really start for until I get my first youth intake. That’s when I become fully invested in my save. They are cheap, enable you to sell of the deadwood and replace with young talent, and if they have the right personality, the right tutor, and the right training, rapidly develop. For example, Ludovic De Freitas from my FM17 Lens save. I will shift older players, promote my own youth, and use that money to further invest in my facilities.

On my current Midtjylland save, we have qualified for the Champions League group stages. We were given £13m. I immediately asked the board to invest this in youth recruitment, youth facilities, and first team training facilities. All vital for youth development. Our facilities look like this now, and will improve further. I did the same with last seasons Europa money.

The key for me is the Junior Coaching and the recruitment. This gets you the good newgens. Along with the best HoYD you can get and the best youth coaches, obviously. I hate loaning them out. If they are good enough, they go into my first team but are available for B-Team or U19s matches. As soon as I can I will give them minutes on the pitch. So looking at the youth intake for 2018, Venzel, Bonner and Holgaard would go in to the first team as soon as they hit the minimum age requirement for the league. Bonner actually became a first team regular at 16.

I always try to have the best youth coaches I can afford. Along with the best HoyD I can find (personality being key for me), I try to max out all youth facilities and keep asking for more U19 staff. I also form affiliations with clubs with good youth facilities and allow their players to train with us and hopefully join our youth intake, for example here Josh Bonner, who came from Brentford (we have the same owners). Here he is early days. He is now a first team player and wanted by all the top EPL sides and other vultures. This is quite a terrifying prospect for smaller clubs like me. As you can see below, Holm is a wanted man. His head has been turned, but fortunately I got him on a contract with a long optional extension and whacked in an early £20m release clause. If he goes, I want the money. 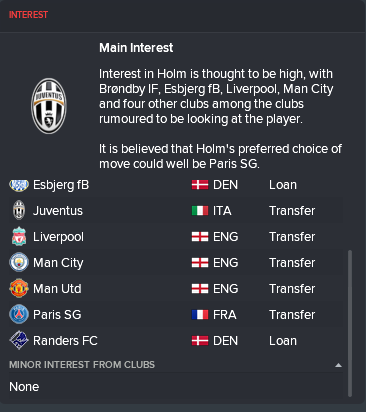 The best newgens are the ones who will die for you and want to stay. I play them, I praise them, and they often start listing me as preferred personal, etc. That happened with LDF, until I left the club and went to Leverkusen. The new manager couldn’t hold on to him and he left for £80m.

I built up an U19s side that looked like this: Holm is now sulking in the B-Team but I’m reintegrating him slowly.

I want to introduce my favourite newgens and start tracking their progress. Kim Venzel is the superstar here but Anderson seems to have the ego. I played either a 4-1-4-1 or a 3-4-3, so they only play together in a three, but they are deadly. Here they are early on and now. as you can see, I played them early and they responded: 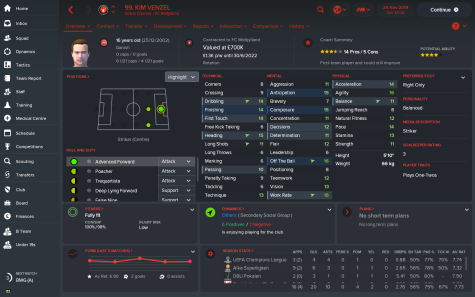 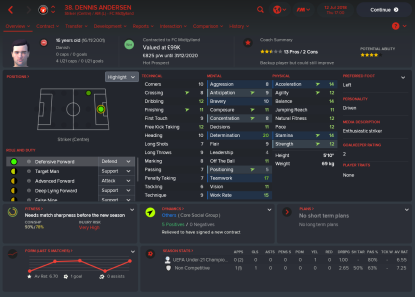 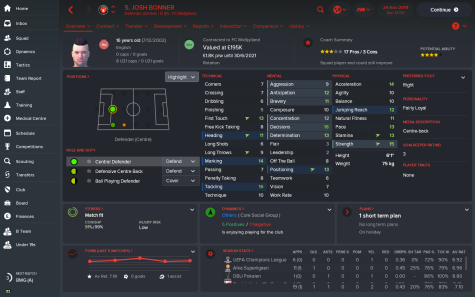 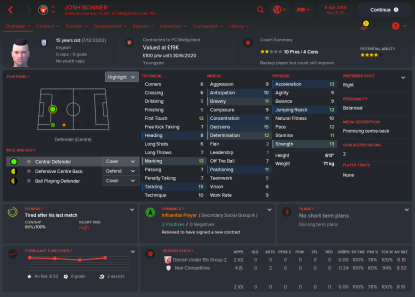 Two other players from the new intake will be discussed later as they develop (Holm issues notwithstanding). 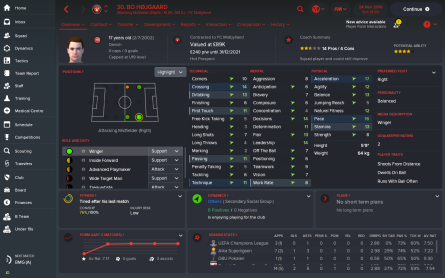 I will write an update on each of these players at the end of the season tracking their development.