Another year done and a new one begun. The challenge I set myself looked at first an easy one: win the CL with a homegrown first 11. We are dominating the Portugal U-19s, 20s and 21s, so that could be on looming the horizon. The issue is that as our coefficient has gone down due to the collective failures of Portuguese teams in Europe, I must now win the league to avoid the qualifying rounds of the CL. This has created a hesitancy to give debuts and trust completely in the youth. This has to change. It’s vital to the success of my mission. However, it’s now the end of season three and I’ve realised that I might have set myself too hard a challenge. Fear of failure is making me over-cautious, something I never was before. I don’t want to get into the vicious circle of depending on winning at all costs just to earn prize money and grab our yearly place in the CL group stage at the cost of stagnating my youth project. A cross roads is approaching with the new season. I will plan my pre-season with this in mind. Sell some players to reinvest in youth, be ruthless (something that we are according to the media) and cut my squad down so that I rely entirely on youth in the future. Bravery is a must in this business and next season I intend to show my cojones are big.

But there are other issues beyond the league and its prize money and entry to Europe. Problems like me not being able to resist buying wonder kids, like Pavon, losing key places where the youth might develop first team experience. Pavon is hella good though. Like hot piss on ice, he made quite a splash on arrival.

He then got injured and spent time recuperating on the beach, perhaps drinking Ice cold sherry and slathering himself with suncream whilst reading Quatro-Quatro-Dos magazine. I’m expecting him to do something next season in the Champions League. Talking of the Champions League…

Undone by stupidity at the San Siro, we lost the first leg 3-0 after at not bad group stage performance.

I thought that we would have to beat either Spurs or Leverkusen (who are dramatically improving in-game, as are Tottenham) and against my expectations a win over Spurs early doors set us up nicely. Sadly, a difficult game in Germany put us firmly back in our place. Following two easy wins, where I continued to blood the youth at this level, over the Danes, we did enough in the last two games to make it through. That 4-1 win over Leverkusen was thrilling and I think we let it go to our head against Milan in the next round. You can’t play like the home team in a hostile San Siro in front of nearly 80,000. As I want my team to be serious challengers in this competition, it was devastating and we let ourselves down badly. At the end of season briefing from the board they let me know that they were not happy about it. It’s the earliest I’ve gone out of the CL in my three years here, and it hurt.

So, I’ve been tinkering and trying out new tactics.

The Inverted Wingbacks have come in. See previous post for details.

I’ve also created this monster. Will post more about this when I’ve fully tested it. 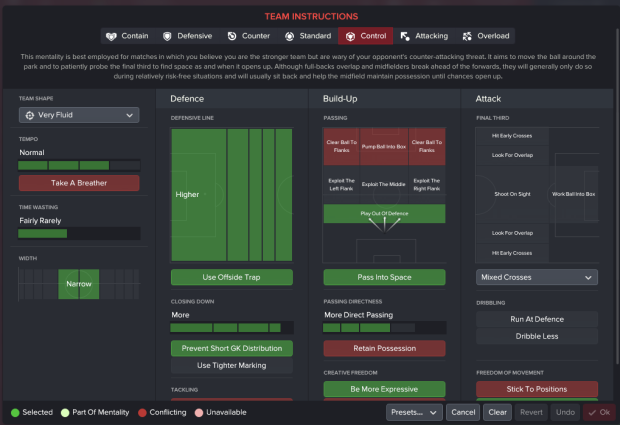 Season review in images for those that are of that persuasion. Particularly proud of being called ‘Ruthless’.

Halfway through the season Goncalo Guedes decided (is it a bug?) that he thought the team was not strong enough – actually, this was after the Milan debacle so he may have a point – and asked to leave. But as soon as the season was over he decided we were alright again. So he spent the rest of the season on the bench as his form dropped like a bollock. He had scored 18 goals from the wing at that point too. Dick. Tried to sell him as ALL of the moneybags teams were sniffing around and I thought I’d use the money to invest in youth, but no one bit so he stayed. Dick.

Some of the youth coming through are quite good so I’m looking forwards to selling him for millions and letting the lads who bleed red come through.

I did the double domestically by winning the Taca.

But lost in the other one to the Green Scum from across town. Dicks.

Financially we are potentially plummeting and it would be nice to become a bit less reliant on prize money and player sales, but as I’m number-blind I don’t understand it all and just trust that we’ll muddle through as we have for the last three seasons.. I understand that our business model is to sell our best every so often and to reinvest in younger talent, but this is worrying:

Especially when we don’t always add sell on fees for deals like these:

But the vultures are already circling: 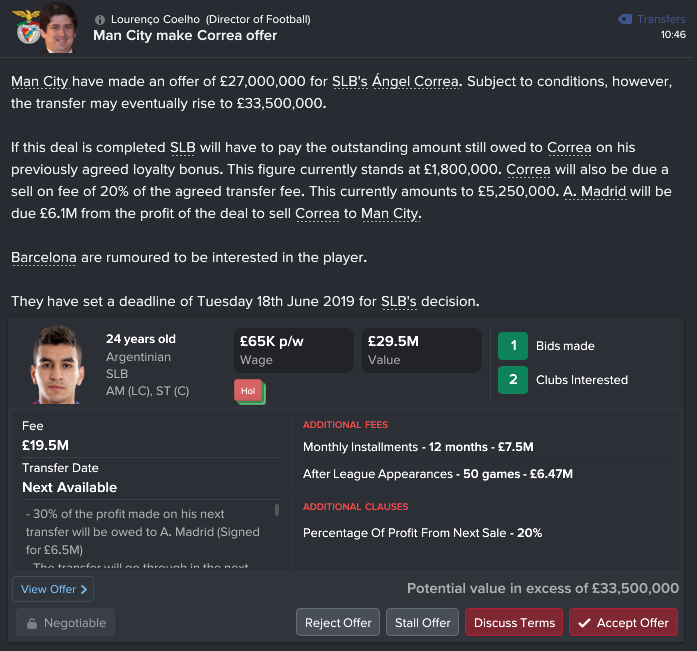 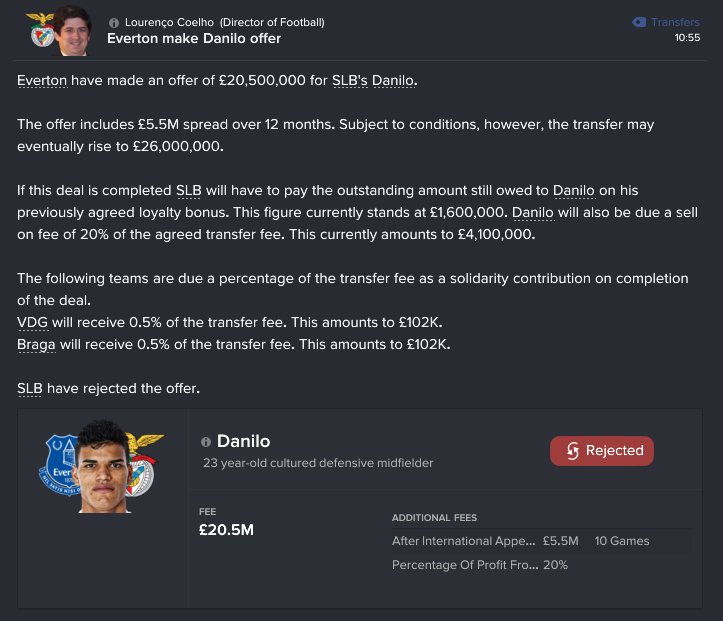 Here is how our team did in the charts: 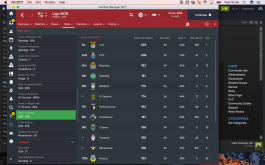 I know I’ll never win manager of the year here because of who we are but it still hurts to be snubbed like this three years in a row.

We smashed the league:

We started slowly, losing to a newly promoted team, but once we had our hands around the league’s throat we didn’t let go. So we go again. This years targets are: