Since I last wrote I’ve mucked about with a cheeky Blackpool save. I edited out the Oystens and added the Udinese guy as a money mad foreground Sugar Daddy. It’s been fun playing simple tactics with simple players. W10 D5 L1 so far, but my true love came calling and I’ve fired up the SLB save again. It’s been an odd start to the season. We lost the opening game to the newly promoted team Portimonense. A red card seemed to take the wind out of my team and it was one of those games where you feel helpless against the creeping scoreline. We were two up when the red card happened and we seemed to let them slowly win. It was humiliating and our lowest league position in years.

I wrote about this in my last post but feel it needs further cogitating. Lesson learned, hopefully.

I finally sold some more of the old guard and promoted youth team players in their place. I wanted to make a profit to try to clear the debts and to invest in youth coaching.

Here’s my season so far.

Hard loss in the CL to Leverkusen but a great win at home to Spurs. 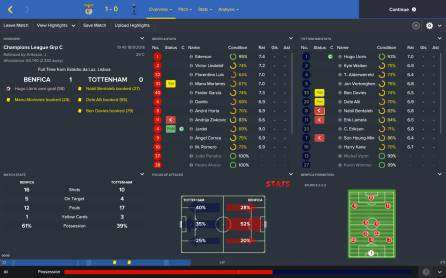 Here are the promoted youth players:

I intend to play them as much as possible. Collido (from Boca, so not truly mine) and Faider Garcia are superb prospects. Trincao had a few games last season and played well. Apart from his shocking natural fitness (3), Coelho looks a great player, and the first of my youths to come through as a natural half back, something I need if I play with double half backs.